Tupelo is Mississippi's Healthiest Hometown in 2012 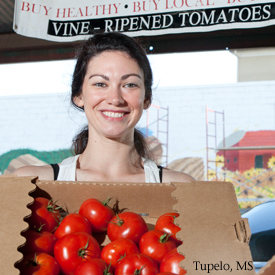 It's a tremendous accomplishment. It proves that we are recognized for our successes in changing Tupelo's culture to one that will benefit all of our citizens, young and old.
Jack Reed, Jr., Mayor, City of Tupelo


The City of Tupelo won a Healthy Hometown award for its population category in 2010, the inaugural year of the program. Led by Mayor Jack Reed, Jr., Tupelo continued their success by being named Healthiest Hometown in 2012. The Healthy Tupelo Task Force, founded in 2009, is leading the way to a healthier community by integrating the entire community's resources to encourage policy changes and implement programs for its citizens. Health on a Shelf is bringing healthy food options to convenience stores, and city parks and recreational complexes give residents ample opportunities to participate in activities including swimming, tennis, baseball, and more. Integrated into its city parks, more than 10 walking trails are available to citizens. Tupelo also has a variety of farmers' markets and policies that support a healthy environment, including a smoke-free policy and a "Three Feet Please"? campaign to keep pedestrians and cyclists safe from passing motorists. 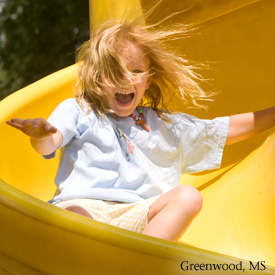 "This award validates all the hard work the city has been doing to encourage Greenwood residents to live a healthy lifestyle. We've been very strategic by improving Greenwood's built environment to include new sidewalks, bike lanes, walking trails, landscaping and lighting, so that people feel safe and comfortable while exercising outdoors."
Carolyn McAdams, Mayor, City of Greenwood


As a result of making wellness a top priority, the City of Greenwood won a Healthy Hometown award for its population category in 2012. Community partners are helping to enforce the smoke-free ordinance, and the city has implemented an extensive network of sidewalks, multipurpose trails, and bike paths to give residents more opportunities to be active. In May 2011, Greenwood became the first Delta community to convert street lanes into bike share lanes. The city is home to numerous road races, including the 300 Oaks Road Race and the Viking Half-Marathon and 5K. Under the leadership of Mayor Carolyn McAdams, Greenwood is taking advantage of technology when it comes to keeping residents informed of events and activities. The mayor hosts "Health First Greenwood,"? which airs on local radio stations and gives listeners tips on leading a healthy lifestyle. The Downtown Greenwood Farmers' Market and Old Time Farmers' Market offer opportunities to find fresh fruits and vegetables, and schools are providing healthy, balanced meal options and actively promoting nutrition. 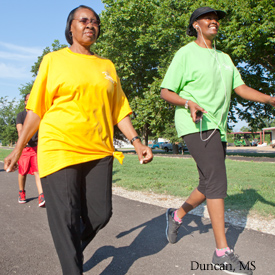 "On behalf of the Town of Duncan, I would like to sincerely thank... the Blue Cross & Blue Shield of Mississippi Foundation for its support of our community. We have been working very hard to make Duncan a healthy place and without their support we would not be able to have our wonderful walking trail and the many programs and activities that we plan on conducting with this amazing award."
Charles Harvey, Mayor, City of Duncan


Through its continued efforts to promote health and wellness, the City of Duncan received a Healthy Hometown award for its population category in 2012. A grant from the Blue Cross &
Blue Shield of Mississippi Foundation in 2011 provided resources for a former railroad bed to be paved for use as a walking trail for residents. The city continued its efforts to promote health and wellness by forming various walking clubs. In 2011, Duncan hosted its first annual "Walk to School Day"? for students of Brooks Elementary School. City leadership developed a "Healthy Employee" policy, providing regular exercise breaks for 30 minutes, twice a week and for healthy snack options in vending machines. As a Healthy Hometown award recipient, Duncan is enhancing the Duncan Walking Trail with outdoor lighting, building new playground areas for children, and purchasing supplies for additional community programs including gardens, health fairs, and exercise centers.